Thanks to a glorious holiday weekend in Bodega Bay, I've been scooped once again by my esteemed friends and colleagues in announcing our work on MSNBC's Hurricane Tracker, which debuted on Saturday. I jumped on this project as soon as I knew we had a chance to work on it, and despite the inevitable project logistics and some awkward travel timing on my part I'm glad to say it made it out before the end of the hurricane season.

There are four storms active in the Atlantic right now: 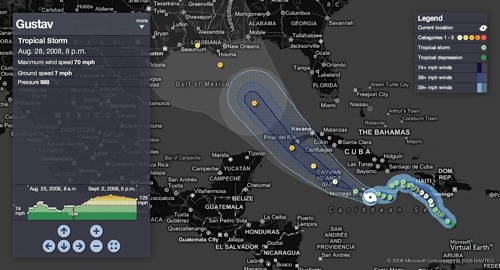 There's much to say about this, not least the fact that it's the first thing I've ever really worked on that exists in a competitive environment with many credible alternatives.

However, there's still more to come so it will be a while before there's time to properly reflect. For now, let me echo Mike in saying I also think map design for the web continues to be an exciting and vibrant area to be working in, and leave you with a quote from Google's Ed Parsons:

Thatâ€™s not to say the principals of design are not important in the creation of â€œmapsâ€ for screen display, indeed one could argue for the need of a â€œnewâ€ cartography which adopts rather than ignores the capabilities of screen based maps to portray information dynamically.