Matt Webb tagged me with this one. Thanks Matt.

1. I have an older brother, Nev. He's my foster brother, 5 years older than me, and my parents fostered him a year before I was born. Since his dad (whom we've never met) was Afro-Caribbean, he's a black guy and occasionally he's grown a mean afro (though he mostly keeps it short). He has cerebral palsy which means he's spent all his life in a wheelchair but it doesn't stop him sharing the same sly sense of humour as the rest of my family, or memorising entire Star Wars scripts or Guns 'n' Roses albums. If you think Jimi Hendrix, in a wheel chair, with a Yorkshire accent, you won't be far wrong.

Growing up with Nev gave me an interesting perspective on life, strengthened by the fact that my dad also works in special needs education. (It's also the case that having a black brother in a wheelchair gives you a weird kind of leverage in arguments, especially with racist and ignorant people).

Here's a picture I stole from my younger brother Henry's myspace page (I go on about Henry's band DARTZ! here from time to time) . It's Nev and Henry with my grandma's dog Lassie, from around 1986. Sorry guys. 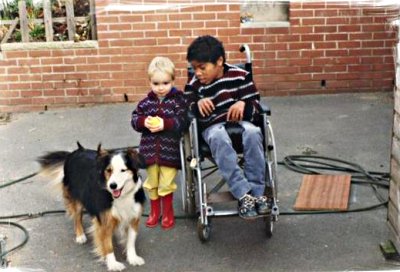 2. I used to play classical guitar. I haven't played seriously for years but I can still sight-read music and work things out by ear (I recently scored pretty highly - 88.9% - in this test). I was OK I suppose, but never particularly accomplished. It did come in handy when I wanted to learn bass so I could play in Puppet Show, the grunge band I was in until university mercifully got in the way. (Lead singer Robert went on to be the guitarist in Executive Distraction Tasks but we didn't sound much like that!). My musical dabblings also stretched to an unreleased (and long forgotten) album of music made with Buzz, an early free software synth package. That was my introduction to the demo scene and the world of generative computer graphics, so it's not all bad.

3. The first time I got in an aeroplane I was 20. Later that summer I wrote about it here in excruciating detail.

4. I'm vegetarian, an atheist and I don't (can't) drive. I realise this is actually three things you probably don't know about me but I just spent two weeks in Dallas, Texas where all three things mark me out as different. In the epitome of automobile-centric, bible thumping, meat-eating America, in some ways I'm the anti-Texan.

My vegetarianism is only through a general antipathy towards meat, rather than a particular philosophical/economic/political/moral stand. If it's a question of me vs the cow then the cow is going down and if I ever have the space then I might keep chickens.

My atheism is a product of being left to my own devices when it comes to religion: if you give a naturally skeptical person a blank slate, they're not wont to let people fill it with anything.

5. I can't say anything useful in any language other than English. This is probably my biggest shame as a wannabe intellectual. In other countries I pick things up quickly and have a great memory for words and phrases, and sounds (I like to think I'm a natural and compulsive mimic), but I've never stuck to it with languages. Fixing this one is a perennial new year's resolution but this year I've already resolved to learn T'ai Chi. Maybe next year?

I suppose it's time to tag 5 more people. Mikel already went and tagged Steve and Wilfried, and Ben and Eric both seem dormant so they all escape my gaze today. Let's see if we can't get something out of Mike Migurski, Karsten Schmidt, Rev Dan Catt, Rod McLaren and Andrea Lau.